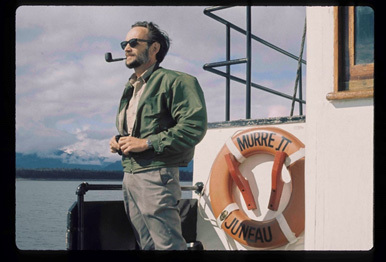 Dale W. Rice died peacefully at his home in Seattle, Washington, USA at the age of 87 on September 17, 2017. Dale had hoped/planned to live to be at least 100, like his old friend marine mammologist Vic Scheffer, but his life was cut short by a combination of congestive heart failure and advanced prostate cancer. He remained his youthful vital self until the end and enjoyed a lovely final spring and summer at his house on Lake Washington.

Dale was noted for his scholarly and comprehensive approach to the study of birds and mammals, his elegant and precise writing style and his intense attention to detail. Over the course of his long career, Dale authored or co-authored at least 164 publications. He was the rare researcher who was both an expert observer and analyst of animals in the wild (i.e., studies of life history and ecology) as well as animal specimens (i.e., studies and in-depth contributions on marine mammal systematics and nomenclature).

Dale was a very shy person in social settings, but one-on-one, he was a witty and entertaining conversationalist and was so well-read he could converse on just about any subject.

He was also an avid book collector and a voracious reader. His book collection included a broad range of books on marine mammals as well as many rare and antiquarian books. As a legacy for future researchers, Dale ensured that his library would be available and remain intact for the research community as a reference library. In his will, he established the Dale W. Rice Memorial Library Trust which is co-managed by trustees Sally Mizroch (retired from NOAA Fisheries, founder of Blue Sea Research) and Sonja Kromann (Marine Mammal Librarian at NOAA Fisheries Alaska Fisheries Science Center (AFSC)) after his death. The library is housed near the AFSC in Seattle and is open by appointment).

Dale W. Rice was born on January 21, 1930, in Grand Haven, Michigan and attended public schools in Springfield, Illinois; Milwaukee, Wisconsin; and Indianapolis, Indiana. He a born naturalist, that kid who studied birds and insects from a young age. He published his first paper at the age of 16 when he was still in high school (Rice, D. W. 1946. Notes on the birds of Marion County. Indiana Audubon Society Yearbook 24: 40-41).

He knew his life-long path from a young age. In his bio sketch in his high school yearbook, he stated that he planned to major in English and science, his hobby was ornithology and he planned to be a zoologist as his vocation. He succeeded on all counts.

Dale’s first job as a professional research biologist was at the Denver Wildlife Research Laboratory, Bureau of Sport Fisheries and Wildlife. He was sent to Midway Island to study and mitigate interactions between albatrosses and naval aircraft on Midway Island. While at Midway, Dale worked closely with noted ornithologist Chandler Robbins (Robbins, C. S and D. W. Rice. 1974. Recoveries of banded Laysan albatrosses (Diomedea immutabilis) and black-footed albatrosses (D. nigripes). Pages 232-277 in W. B. King ed. Pelagic Studies of Seabirds in the Central and Eastern Pacific Ocean. Smithsonian Contributions to Zoology. No. 158) and he was part of the team which banded “Wisdom, The Albatross” in December 1956. Wisdom is the oldest known albatross and hatched her most recent chick in November 2018.

In late 1958, Karl Kenyon recruited Dale to work at the newly formed marine mammal lab in Seattle (at the time under US Department of the Interior, Bureau of Commercial Fisheries, eventually under NOAA Fisheries). Dale’s first assignment was to develop the research program to study the biology of the large whales that were being caught at the Richmond, California whaling stations. Here’s a quote from the publication summarizing fisheries research in Seattle from 1931-1981 (Fifty Years of Cooperation and Commitment: The Northwest and Alaska Fisheries Center. NOAA Technical Memorandum NMFS F/NWC 34)

"At the time Rice began whale studies, two whaling stations were in operation on San Francisco Bay at Richmond, California--one by the Del Monte Fishing Company and the other by Golden Gate Fishing Company. Much of Rice’s program involved examination of whales brought into these shore stations, and this whale research continued until 1971 when the large commercial species were declared endangered and the last remaining U. S. whaling station, Del Monte, was closed.

Other parts of the whale research program involved tagging [marking] animals from chartered catcher boats, observing living whales from vessels and from shore, and analyzing catch statistics. In addition to the commercial species taken at these whaling stations, gray whales were taken under special permit. An annual census of the southward migration of the gray whales was conducted near Monterey, California, beginning 1967-68. A monograph on the life history and ecology of the gray whale was published by Rice and Wolman in 1971."

At the invitation of Canadian researcher G. C. Pike (Fisheries Research Board of Canada, Nanaimo, B.C., Canada), Rice spent the early part of the 1959 whaling season at the whaling station at Coal Harbour, British Columbia, familiarizing himself with standard procedures for collecting data and specimens. He also spent time aboard the catcher boat Polar 5, observing whale hunting techniques.

Starting in 1960, Dale represented the US at the International Whaling Commission’s (IWC) Scientific Committee. At the 14th Annual Meeting of the IWC 1962, the Scientific Committee set up a working group that consisted of one whale biologist from each of the four nations that were then engaged in whaling in the North Pacific. Appointed to this group were G. C. Pike of the Fisheries Research Board of Canada, Nanaimo; H. Omura of The Whales Research Institute, Tokyo; D. W. Rice of the U. S. Fish and Wildlife Service, Seattle; and V. A. Arseniev of the All-Union Research Institute of Marine Fisheries and Oceanography (VNIRO), Moscow. M. V. Ivashin, also with VNIRO, replaced Arseniev as Soviet member in 1964. The working group was charged with coordinating whale research projects throughout the North Pacific, assessing the size and sustainable yields of whale populations, and recommending management regulations.

Dale’s long-time friend and colleague Seiji Ohsumi recalls Dale’s attendance at the annual meetings of the IWC’s Scientific Committee in the 1960s through the early 1970s, where, in some years, Dale was the only member of the United States scientific delegation. Dale also attended many special meetings and workshops of the Scientific Committee, including workshops on sperm whales (Seattle, 1963), age determination (Oslo, 1968) and the International Conference on the Biology of Whales (northern Virginia, 1971) 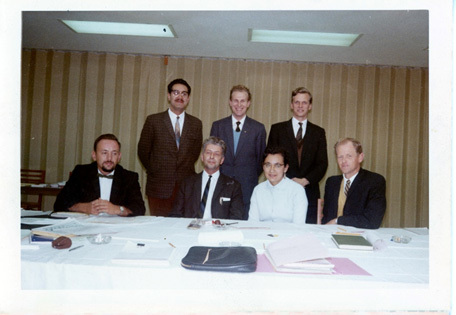 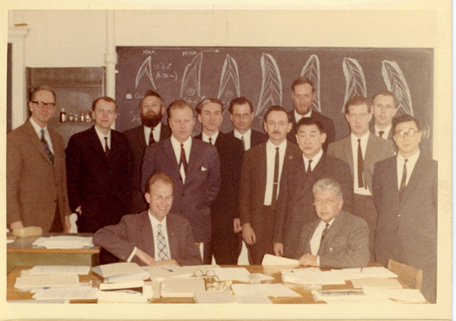 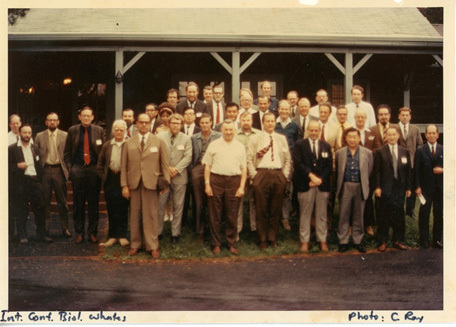 Dale initiated the US whale marking program and conducted extensive whale marking and sightings cruises from 1962-1969 (see Mizroch, Balcomb and Rice. 2018. Historical winter and summer distribution of large whales along the eastern North Pacific coast based on data from the US whale marking program, 1962-1969. . Paper SC/67b/IA/02 to the IWC Scientific Committee, May 2018. Bled, Slovenia). The cruises ranged from San Francisco Bay down to the southern tip of Baja California, and in some years ranged east to mainland Mexico and west to the Revillagigedo Archipelago.

A young Ken Balcomb began working with Dale on these marking cruises in 1965. In 1975, Dale recruited and funded Ken Balcomb to conduct killer whale surveys in Washington State. Ken founded the Center for Whale Research and began working closely with Canadian researcher Mike Bigg which helped launch killer whale photo-identification studies over a broad region in the Pacific Northwest.

Toshio Kasuya, winner of the Society of Marine Mammalogy’s Kenneth S. Norris Lifetime Achievement Award in 2007, recalls working with Dale in December 1966 at the Richmond Whaling station where he examined gray whales which were taken under special permit for scientific research. He recalls that the 1967 marking cruise on the Sioux City, from the San Francisco Bay to the southern tip of Baja California, gave him his first glimpse of small cetacean biology. He says that what he learned from Dale during that cruise formed the start of his carrier as small cetacean biologist as he transitioned from working on large whale studies at the WRI to small cetacean studies with Nishiwaki at the Ocean Research Institute at the University of Tokyo (Kasuya, T. 2008. Cetacean biology and conservation: A Japanese scientist’s perspective spanning 46 years. Marine Mammal Science 24(4):749-773).

Under the auspices of the Marine Mammal Project of the 1972 US-USSR Agreement on Cooperation in the Field of Environmental Protection (Miller 1984), two joint research efforts were undertaken with Soviet cetologists. These included the 1975 whale marking cruise of the Vnushitel'nyi in the equatorial eastern Pacific with A. A. Berzin of the Magadan Laboratory of the Pacific Research Institute for Marine Fisheries and Oceanography (TINRO), Vladivostok (the Far-eastern branch of VNIRO); and the 1977 radio-tagging cruise of the Chaik in southeastern Alaska with Berzin and V. A. Zemsky of VNIRO, Moscow.

The papers below are just a few other significant studies that Dale produced while leading research and field studies at the US whaling stations:

After the whaling stations closed, Dale continued to do whale surveys in many oceans. Dale’s whale surveys in Mexico, Hawaii and Alaska also helped initiate photo-identification studies on humpback whales.

In his later years, Dale wrote a series of scholarly works, including many chapters in the Encyclopedia of Marine Mammals, edited by W. F. Perrin, B. Wursig and J. G. M. Thewissen.

Dale’s final “magnum opus” was his Special Publication on marine mammal systematics and distribution. Dale served on the Society for Marine Mammalogy’s Taxonomy Committee until his death.